metallic glass and nanoglass is the point focus in mechanical area. 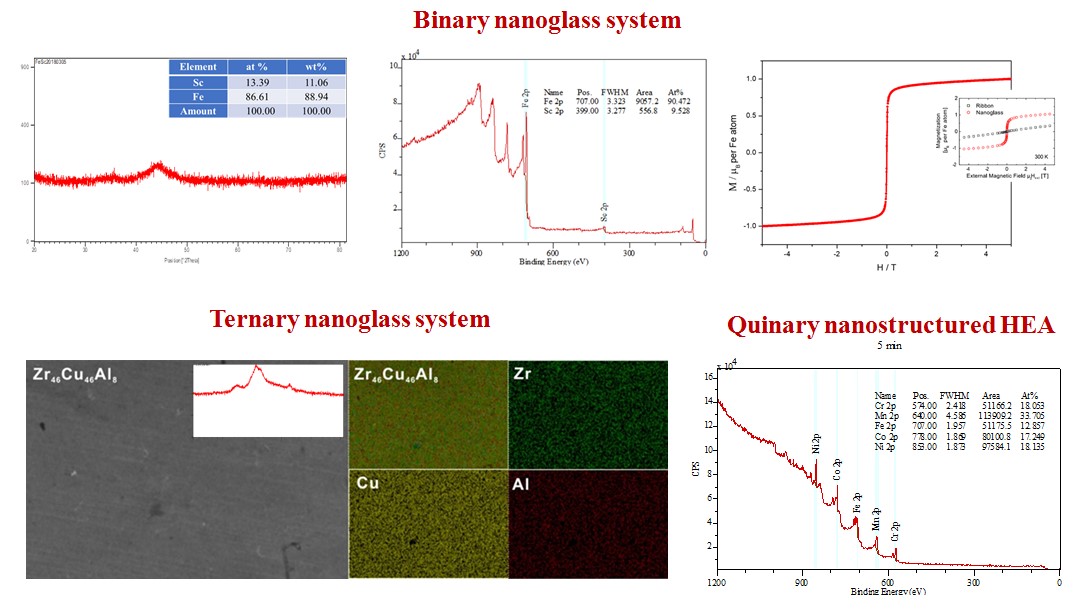 Binary nanoglass system: based on IGC system, binary iron scandium nanoglasswas prepared by thermal evaporation. By comparing with ribbion sample, the magnetic change was a strong proof of the theory of nanocrystalline interface.

Ternary nanoglass system: based on IGC system, the ternary ZrCuAlnanoglass alloy with uniform composition was prepared by laser.

The Curie temperature, TC, of a-Fe90-xCoxSc10 was determined using both mean field theory and Landau’s theory of second-order phase transitions in zero and non-zero external fields. The value of TC of a- Fe5Co85Sc10, determined by the above theoretical approaches is 1150 K, which is the highest TC ever measured for amorphous alloys. The flattening of the measured normalized magnetization, M(T)/M(0), as a function of the reduced  temperature, T/TC, is explained within the framework of the Handrich- Kobe model. According to this model the fluctuation of the exchange integral is the main reason for the flattening of M(T)/M(0). In the case of a-Fe90Sc10 without Co, however, the fluctuation of the exchange integral isdominant only at zero external field, Bex=0. In contrast to other ferromagnetic alloys, where the flattening of M(T)/M(0) is characteristic for an amorphous structure,  the a- Fe5Co85Sc10 does not exhibit any trace of the fluctuation of the exchange integral.

The addition of Co content in Fe90-xCoxSc10 (x = 1, 3, 5 and 7) can not only tune the Curie temperature of these alloys to room temperature, but also simultaneously increase the maximum value of the magnetic entropy change (−ΔSMpk). The −ΔSMpk is 1.40 J/kg K at ΔH = 1.5 T (ΔH: magnetic field change) with x = 7. The maximum refrigerant capacity (RC) is 191.9 J/kg at ΔH = 1.5 T with x = 3, which is higher than that of most of Fe-based amorphous alloys so far discovered. Increasing the ΔH to 2 T, the RC values of these alloys can reach as high as 265.2 J/kg, which is comparable to those detected in crystalline Gd and Gd5Si2Ge2. Enhanced RC values observed in these alloys promise them to be good candidates for near room-temperature magnetic refrigerants.

Crystallization kinetics of a series of Zr-Cu-Al bulk metallic glasses with different glass-forming abilities were systematically investigated using differential scanning calorimetry, time-resolved neutron diffraction, and high-resolution transmission electron microscopy. Experimental results revealed a transition of classic-to-avalanche types of nucleation for the Zr-Cu-Al glass alloys upon isothermal annealing. The classic mode is characterized by a continuous nucleation and growth of Zr2Cu-type crystals. The avalanche mode features an abrupt formation of massive Cu10Zr7-type precipitates with a complex, low-symmetry crystalline structure. Calorimetric measurements identified an anomalous exothermic peak prior to crystallization for metallic glasses with the Cu10Zr7-type crystalline phase. The formation of a metastable amorphous/semi-crystalline phase was observed using the electron microscopy prior to crystallization for glasses with an anomalous exothermic event. Our results indicate that the formation of a metastable phase might lower the free energy barrier of the crystallization and trigger an avalanche type of nucleation. Neutron diffraction pair distribution function analysis suggests that the easy connection of short-range clusters at the medium-range length scale would favor the avalanche nucleation. 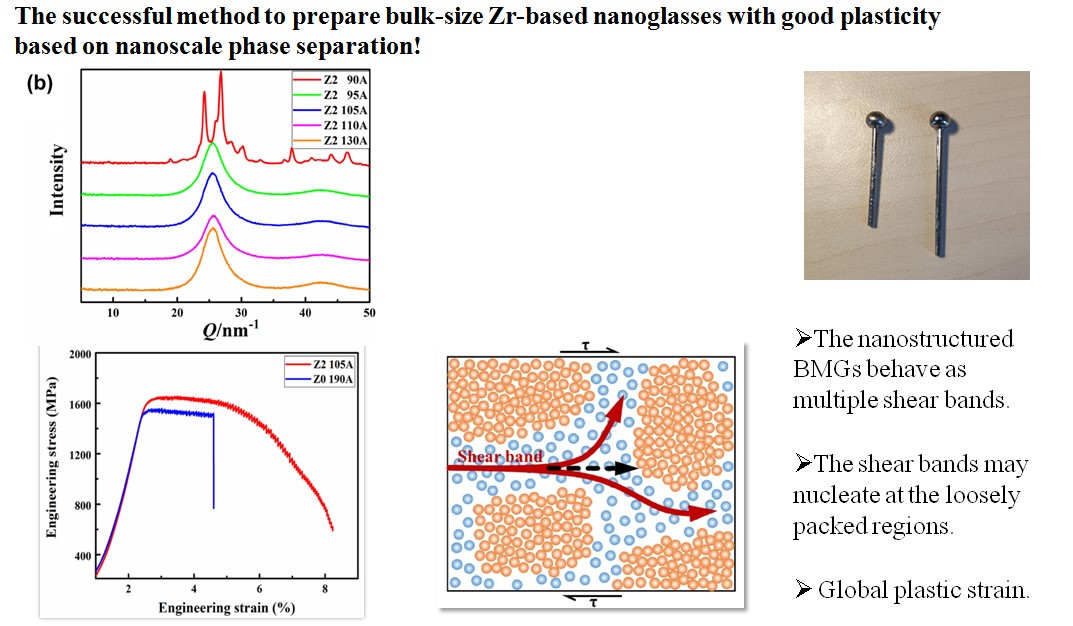 The effects of casting currents on the thermophysical behaviors, atomic and nanoscale structure, and mechanical propertiesof two Zr-based-bulk metallic glasses, i.e. Zr59Cu33Al8 and Zr59(Cu0.55Fe0.45)33Al8 were studied by using differential scanning calorimetry, wide-angle X-ray diffraction, and small-angle X-ray scattering, as well as compression tests. The casting currents can be tuned to change the casting initiative temperature. Results revealed that there is no anomalous structural change for the Zr59Cu33Al8 molten liquid before crystallization during cooling with different casting currents. In contrast, liquid-state phase separation was suggested to occur in the Zr59(Cu0.55Fe0.45)33Al8 molten liquid prepared using lower casting current before crystallization during cooling. The position shift of the first sharp diffraction peak for the diffraction pattern of Zr59(Cu0.55Fe0.45)33Al8 shows that the density of the molten liquid may decrease upon cooling at different casting currents. The small-angle X-ray scattering results indicate that the heterogeneity of the Zr59(Cu0.55Fe0.45)33Al8 metallic glasses increases with decreasing the casting temperature. As a result, the metallic glasses with a liquid-state phase separation possess better mechanical properties, including higher-yielding stress and more significant compressive ductility. The increase of degree of heterogeneity formed by nanoscale liquid-state phase separation and their interactions with the shear bands for the Zr-Cu-Fe-Al bulk metallic glasses were suggestedto be responsible for the enhanced mechanical properties. This results may shed light on research and development of nanostructured bulk metallic glasses with tunable structures and plasticity. 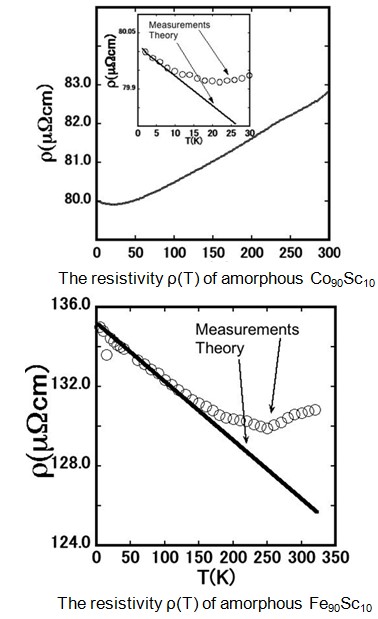 The resistivity of amorphous Fe90Sc10 and Co90Sc10 alloys can be described well in terms of a simple model based on the wave character of electrons and their associated tunnelling over the temperature ranges ~1.9 K to 135 K and ~1.9 K to 12 K respectively. The extended range of agreement between experiment and theory for amorphous Fe90Sc10 is linked with its relatively small mean free path of λFe90Sc10 = 0.32 nm, thus allowing electron waves to tunnel between clusters. On the other hand the restricted region of tunnelling of electron waves for amorphous Co90Sc10 alloys is linked with its relatively large mean free path of λCo90Sc10 = 0.48 nm which restricts the ability for tunnelling between clusters while enabling electron waves to tunnel between different regions with a cluster.